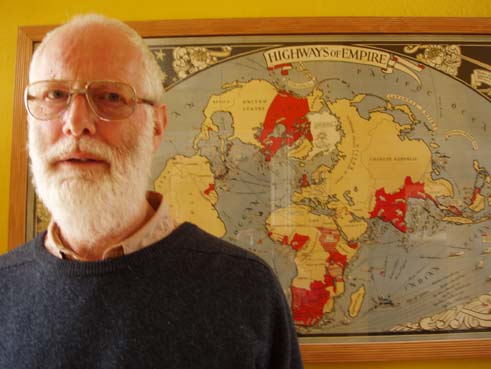 For other photographs see the introduction to the What was new page.

Early career (all in London)

Career in the British Library

Main achievements as Map Librarian of the British Library

** Overall responsibility for the move of 4.2 million maps (including 67,000 volumes) from the British Museum to the St Pancras building, with the reading closed for just one month.

** Concluded negotiations, over many years, for the entire Ordnance Survey National Topographic Database (equivalent to 230,000 published sheets) to be deposited annually (2001?).

** Involved in the purchase (initially as adviser) of a number of atlases and maps - see Section 5 ('Notable Acquisitions') of the Imago Mundi 'Chronicle' (1984-2001), where the more significant items are listed, including MS material acquired for the Department of Manuscripts.

* Helen Wallis Fellowship at the British Library - instigator, organiser and member of the Selection Committee (1997-2001).

* Devised and contributed significantly to the 'Public Service Guide', a compendium of information to help in answering Reading Room enquiries.

Worked to achieve 'interavailability', allowing cartographic material from different BL departments to be compared, side-by-side, in the Maps Reading Room.

Abandoned the geographical pressmarking classification system (in use since c. 1850), which had necessitated complicated interfiling. Also abandoned, and rectified, the storage of dissected maps in solander boxes.

Also edited or contributed to other monographs, principally:
Top of page

{reviews, prefaces to books, etc. are not listed}

2005. 'Issues arising out of the Forbes Smiley affair'.

*** 2011 [ongoing]. A critical re-examination of portolan charts with a reassessment of their replication and seaboard function. (A book-length collection of essays, notes and analysis, on 20 webpages and over 80 tables and graphs) {Note: it was previously '... re-examination of early portolan charts ...' but was altered in February 2012 to take account of the toponymic examination that extended into the 17th century}
See the above link or the Portolan Chart Bibliography for details of the component parts of this continuing online publication

* 2012. 'Why were medieval sea charts still being produced four centuries later? Does the answer lie in the Aegean?', text and podcast of the paper given to the international conference, "Cyprus on the crossroads of travellers and map-makers from the 15th to 20th century", organized by the Sylvia Ioannou Foundation, Athens, 18-20 October 2012, at the Museum of Cycladic Art.

** 2015. Listing and analysis of portolan chart toponyms along the continuous coastline from Dunkirk to Mogador (early 14th to late 17th century) including the transcribed names from the 'Liber de existencia riveriarum' and 'Lo compasso de navegare' as well as the Carte Pisane and Cortona chart (a much expanded and revised version of the 2013 Excel spreadsheet).

** 2016. Cartographic innovations by the early portolan chartmakers (and subsequent developments). [Focusing through the centuries on the traditional medieval coverage: the Mediterranean and Black Seas, the North Sea and Baltic, and north-west Africa.]

** 2020. The Charta Rogeriana: a reappraisal of the making of al-Idrīsī's world map of 1154 and its dissemination.

** 2020. The mental wind compass of the medieval Mediterranean: the rediscovery of its structure and interpretations of its use (including a section authored by Roel Nicolai).

** 2020. [with Captain Michael Barritt RN.], The Representation of Navigational Hazards: the Development of Toponymy and Symbology on Portolan Charts from the 13th Century onwards, The Journal of the Hakluyt Society, December 2020.

*** 2021. 'Mediterranean portolan charts: their origin in the mental maps of medieval sailors, their function and their early development' (an extended essay).